Part Two: 'Everything I do is about championing and supporting entrepreneurial thinking'

Metrikus Meets is a series where we talk with some of the brightest minds about the future of work, IoT, the built environment... and most importantly, themselves! We want to get to know the person behind the ideas.

Last week we published Part One of our interview with Caleb Parker. You might know him as ‘the podcast guy’, but he’s much more than that. A champion of innovators and entrepreneurs, Caleb Parker is on a mission to create a positive impact in the world of commercial real estate – and beyond. His company Bold offers ‘flexible spaces to dream, create, share, and succeed’, but Bold isn’t just about work. Community and inspiration (and custom roasted coffee) lie at the heart of everything they do.

In Part One, Caleb told us all about where his journey began, shares how Bold came to be and gives us his two cents on the future of work. Go back and read it here!

Now, in Part Two, things get deep: Caleb reveals his ‘why’, shares what he’s learned from the lowest point in his career and reminds us why the best is yet to come.

Caleb on his ‘why’

I think it's always important to share why we're in business. On a personal basis, I've been an entrepreneur most of my career. I've gone in and out of corporate life but mostly my career has been entrepreneurial. This is my eighth company now! As for my personal ‘why’, I'm a big believer that entrepreneurs and innovators make the world a better place, whatever the problem is that we’re working on.

If you look back over history, every modern convenience that we have today is because an entrepreneur solved some problem at some point. So for me, everything I do is all about championing and supporting entrepreneurial thinking. And that could be someone starting their own business, or it could be somebody innovating within a big organization.

But office real estate hasn't been friendly to entrepreneurs throughout history. It’s been more of an investment vehicle for investors. The whole industry of commercial real estate, as it pertains to the office, is driven around providing a return to an investor – they’ve been the customer. Instead, I believe that we should be building and creating products for customers: that's how you drive returns for investors.

But we’re still building buildings in a certain way. We expect companies to come in and have certain pedigrees, to meet certain thresholds, and to put a certain amount of cash in to be able to have access to our buildings. Because we have to reduce the risk to the real estate investor that you won’t default on your lease.

But that has a massive effect on entrepreneurs.

Look, if you have a good idea, and you want to go solve that problem, you don't really need an office. We've seen that in the last 18 months. How many companies have been launched during the pandemic without having an office? Maybe 20 years ago we needed an office because we had to plug into the infrastructure of data and we didn't have WiFi or high speed data at home like we do now.

But to create, we have to collaborate with other people. And while we can do that online – I've been innovating and creating with people all around the world the past 18 months  (really the past 10 years to be honest!) – sometimes we do still want to come together in person.

And so I've been personally trying to solve that problem for the past 10 years, in different companies in different ways. Because I believe that we shouldn't have to sign up for a white box for 10 years, pay a lot of money to have access to it, then when we're done with it, pay a lot of money to make it a white box again, and then go on to to our next white box. I think we should make real estate more accessible. So that's why I do what I do.

I don't like the word ‘work’ anymore. It’s not that I don't like work, but I don't like the word work. I think work has this negative connotation to it, like “ugh, we have to go to work”. I imagine a world where instead of people working for a boss or working for a company, people commit to a cause. It's something that we want to do, we're not just going to collect the paycheck, we're going because it's something that we're passionate about, it's a mission that we're aligned with.

So everything I've been doing the past decade, championing entrepreneurs, I've had a passion for it – it hasn't felt like work to me. And I just think that everybody should have the opportunity to do that. And if more companies would be mission led, and would be authentic with the positive impact they're trying to make on the world, and recruit people that are aligned with the same kind of mission, then I think companies would grow faster, and people would be happier.

I had a startup back in the US with a co-founder, and I didn't know this at the time, but we weren't aligned in how we wanted to do business, ethically. And we raised some capital but then we ran out of money before we raised our next round. And that’s when the misalignment surfaced. We ended up parting ways. I lost a business partner and a friend in that.

What I've learned from that is, pick your partners wisely and look for chemical connections and alignment. That’s why I'm glad for the deal that I've done with Newable and NewFlex because there’s so much alignment there.

Caleb on the peaks and valleys of entrepreneurship, and why the best is yet to come

I think in any entrepreneur's journey there's usually more valleys than peaks. But the wins make it all worth it. And I'm always an optimist and believe that the best one hasn't happened yet. My goals are set really high and I haven't reached them yet but I’m taking steps up the ladder.

I guess probably the biggest one to date was when Bold was acquired by NewFlex/Newable. When I was raising money to grow the team and complete management agreement deals with asset managers, I had a few meetings with Newable/NewFlex.  We initially started talking about our finance round, but pivoted to an acquisition conversation way earlier than I ever would have anticipated. But I really liked them as a company. There was a lot of alignment with senior leadership and they have a strong team. Their track record and the experience was second to none and they had infrastructure ready to plug into. So I thought, if I do this deal I can fast forward – because with the pain and the energy and the time it takes to raise capital and various finance rounds, I can skip a lot of that and instantly be ready to scale.

So I guess getting to have my ideas manifest to the point where someone else sees value in it, and acquires it, that would probably be a highlight as an entrepreneur. But the biggest thing hasn't happened yet!

Massive thanks to Caleb for spending time with us for our Metrikus Meets series: we hope you learned as much as we did!

You can find Caleb Parker on LinkedIn, you can listen to him on his podcast #WorkBold and you can work with him at Bold locations opening across the UK: check them out here.

If you have someone you think we should speak to for Metrikus Meets – maybe it’s you! – then drop an email to caitlin@metrikus.io with their (your!) name and what you think we could chat about!

Part One: 'Fortune favours the bold'

Metrikus Meets is a series where we talk with some of the...

Black History Month - 5 innovators you should know about 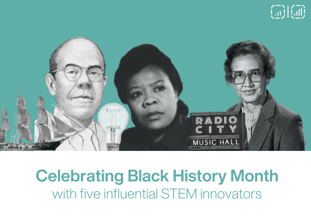 For far too long mainstream history has been whitewashed, resulting in the stories of marginalised...